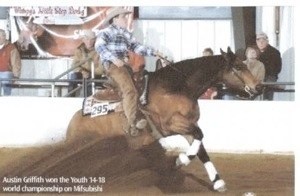 While many 16-year-old boys are looking for trouble, Austin Griffith was looking for another horse show! This talented young man won not only one world championship in 2007, but managed to win two titles on two different horses, as well as showing another in some aged events. However, his championship titles didn’t surprise anyone who knows the Griffith family and their Autumn Rose Farm. His parents, Ollie and Debbie Griffith, have coached the Ohio State University Equestrian Team since it’s inception. In addition, his father is a NRHA reserve world champion and his sister, Ashley, is a world and reserve world champion. And Ollie and Debbie have coached multiple world champions over the past last years. So it really didn’t come as a surprise to anyone that Austin is now a multiple NRHA world champion.

Griffith, who is a sophomore at Bishop Watterson High School, Columbus, Ohio, spends much of his time focusing on horses. “There’s not much time for anything else,” he added with a chuckle. “We’d been looking for a horse for me to show when I tried Mifsubishi,” Griffith explained about the horse on which he won the youth 14-18 title. “I got along well with him, and the plan was for me to show him in the youth division.  But we didn’t start thinking about the limited non pro title until a little later. Rooster Wilson, the horse I showed in limited non pro, just sort of went along early in the year, because I was really focused on the youth class.”

YOUTH 14-18
Mifsubishi was Griffith’s partner in youth 14-18 competition. It was clear from the beginning that this duo was going to be tough to get around in the youth 14-18 division. They started the year early by showing in Ruston, Louisiana, and managed to rack up five consecutive class wins within the first three shows they attended.

“One of the highlights of showing “Mif” this year was at the All American Quarter Horse Congress,” said Griffith. “It was one of the last times I showed him and we were the NYATT (National Youth Activity Team Tournament) reining reserve champions.” However, everything didn’t always go smoothly for Mif and Griffith. “Probably one of the worst runs I had all year was at the Kentucky State Fairgrounds. He was so scared of the cattle and pretty frazzled that a guy at the gate asked me if he was a young horse!”

Mifsubishi is an eight-year-old gelding by 1994 NRHA Futurity Open Reserve Champion Mifillena and out of 1996 NRHA Novice Horse Open World Champion Isle Bea Dun It.  Griffith earned an impressive 433.5 points in pursuit of his world championship and finished the year close to 200 points ahead of his closest competition.  “I was lucky and didn’t have to show him much at the end of the season.”  In fact, Griffith didn’t show Mifsubishi after October.  He was the 2006 outh 14-18 Reserve World Champion the previous year aboard TT Tivios Twist.

LIMITED NON PRO
Griffith’s mount in limited non pro competition was an eight-year-old stallion, Rooster Wilson.  “My dad bought him several years ago for my sister to show in the derbies,” explained Griffith.  “I showed him one time last year and then started showing him in the limited non pro division at the start of 2007.” Griffith began posting wins on the handsome stallion early in the season and took advantage of the opportunity to cross enter in the non pro and intermediate non pro classes.

“I have to say that there was not one particular run that was better than the other,” noted . “He was so consistent last summer, and it all came together several times throughout the year. It’s always nice to have a good run. The only time that I remember he didn’t show very well was one show that had fans all over the show arena. He just didn’t like that! Overall, both of my horses were pretty consistent throughout the year, and we showed almost every weekend.” 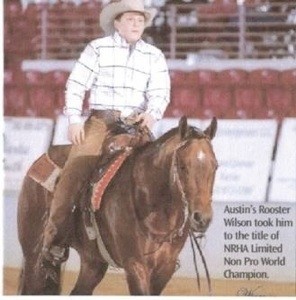 Rooster Wilson is by Two Million Dollar Sire Gallo Del Cielo (Rooster) and out of Docs Lady Wilson.  Griffith and his laid-back stallion earned $4,874 to capture the limited non pro world title and also placed third in the intermediate non pro Top Ten standings earning an additional $4,126. All told, Rooster Wilson has NRHA Lifetime Earnings of $22,061. “We still own him,” added Griffith, “so it’s hard to say what he will do next.”During the 2007 show season, Griffith tried his luck at Category 2 events aboard Travel Whiz Me, the 2006 Youth 14-18 World Champion. “I’m planning on hitting some derbies this year,” he said.  “I have a five-year-old gelding by Roosters Wrangler that I’m going to show.”

Megan Foley had been begging her parents for a horse when that finally gave in and signed her up for summer camp at Ollie and Debbie Griffith’s Autumn Rose Farm, Plain City, Ohio. But little did they know that this would be a significant point in their young daughter’s life. “I cried for a week after summer camp was over, so they signed me up for riding lessons,” Foley said about the start of her riding career. “And I’ve been riding with Ollie ever since. I live about 15 minutes away from the farm, so I spend a lot of time over there.”

The Griffith’s are like family to me,” Foley added. “I’ve always ridden with Ollie and probably always will. Laura (Phillips), who works with Ollie, has been great to me as well. “They are a great group of people.” The Griffith’s Autumn Rose Farm has produced many NRHA champions over the last few years, and the 2007 show season was no exception.

The Foley’s purchased RW Smoke, or “Brutus” as he is known at home, in the fall of 2006, and Foley spent some time getting to know her new horse in the show pen. In addition, she gathered a lot of show-ring experience aboard Corchas Pine Boss. The duo finished the 2006 season in fourth place in the youth 13 & under Top Ten. 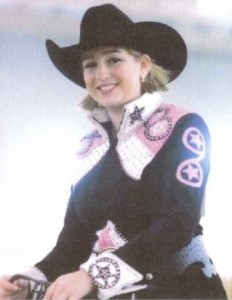 All this preparation paid off when Foley and Brutus started the 2007 show season.  The talented young duo kicked the year off with six consecutive class wins.  “That was my last year in 13 & under, and I wanted to haul for a title, but my parent’s always said, ‘let’s see what happens.’  By the third show we decided to go for it,” she said.  With the Autumn Rose Farm gang, Foley traveled many miles in pursuit of her championship.

One of the many highlights of the show season for Foley was the All American Quarter Horse Congress in Columbus, Ohio.  “The Congress is such fun because everyone is there, and we all have such a good time.”  Foley had something to celebrate.  “We won the American Quarter Horse Association (AQHA) youth 13 & under and placed fourth in the NRHA youth 13 & under class as well.

However, no world champion title is complete without a “travel” story and the Foleys had several in 2007.  “I’d missed a number of school days in 2006, so I couldn’t afford to miss any early in 2007.  My dad and I flew to a show in North Carolina, so I could fly home and be at school on Monday.  However, when we got to the airport on Sunday night, we discovered that our flight had been delayed.  When the plane finally did take off, the cabin began to fill with smoke, and the plane had to make an emergency landing – complete with four fire trucks responding to the scene!” 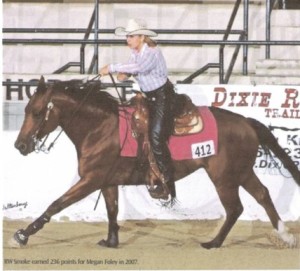 “When we got back to the terminal, we were told that there were no seats available until Tuesday, and that wasn’t going to work because I needed to be at school on Monday morning.  So, my dad rented a car, and we shared it with two complete strangers from our plane.”  After all that, Foley did get to school on Monday morning, but that’s not a trip she’s going to forget for a long time.

Another time last summer I was traveling with Debbie, Ollie, and Austin Griffith and another rider from our barn, Libby, to a show in Tennessee,” remembered Foley.  We left for home on Sunday night and drove all night.  We got to the barn at 6:30 a.m., and I was headed to school by 7:00 a.m. I could do without any more trips like that!”

Fortunately, Foley’s title didn’t come down to the very last show.  As a result of her early success, the duo didn’t have to show past the end of October.  In fact, they ended the season with an incredible 70-point lead.

Foley, who is 14 (almost 15!), is currently a freshman at Bishop Watterson High School in Clinton, Ohio.  In addition to her busy show schedule, Foley is a member of the Key Club, Ski Club, and the Well Club, which is a drug-and-alcohol-free organization.

RW Smoke is a seven-year-old gelding by Roosters Wrangler and out of Smokin Holly Joe.  Together, Brutus and Foley earned 236 points to garner the 2007 youth 13 & under world championship.  The duo also claimed the Ohio Valley Reining Horse Association youth 13 & under championship.  I still own Brutus and plan on showing him again in 2008, although not as much,” she added.

I couldn’t have accomplished this without the support of my family,” added Foley.  “My parents Timothy and Tori were always there for me.  Also, my older sister Jackie made a lot of sacrifices for me this past year.”

Megan gives credit to her family and Ollie and Debbie Griffith for helping her win the world title.

Youth 13 & Under Division – By Karen Shedlauskas